The Ghost of Elias W. Hale 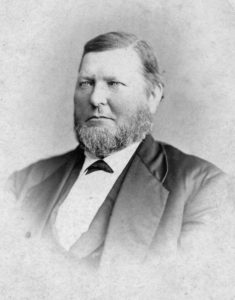 The Ghost of Elias W. Hale
By Ruth Tonachel

He was a civil engineer, a farmer, a banker, a lumberman, an investor in real estate, founder of many Towanda institutions, a husband and father. But Elias W. Hale’s greatest and most vibrant legacy may be the building that still bears his name – Hale’s Opera House – now known as the Keystone Theatre.

So, who was Elias W. Hale and why did he build a theatre?

Born in the family home at Woodside located along Towanda Creek on December 13, 1816, Elias Wellington (E.W.) was the baby in a family of five. His father, Reuben Hale – one of the early white settlers in the region – died when he was six. As the youngest, E. W. became responsible for his widowed mother who ran the farm for many years and provided his early schooling. Prior to marrying Reuben in 1802, E.W.’s mother, Wealthy Tracy, had been a teacher. She served as the first teacher at the Hale school in South Towanda. A life-long “extensive reader,” E.W. attended school in Towanda and then studied civil engineering at Cazenovia, NY. He subsequently worked as an engineer and surveyor during the building of the North Branch Canal on the Susquehanna.

In the early 1840’s – at around age 25 – E.W. gave up engineering in order to run the farm for his mother. (The canal project was abandoned a few years later in favor of railroads, anyway). The Hales were better off and better educated than most people in the region. However E.W. lacked the farm and business experience his widowed mother had developed over the years. According to a local newspaper article published in 1896, “he decided to relieve his mother from the toil incident in the management of her farm of several hundred acres by taking it upon himself. Practically, he knew nothing about farm work but theoretically he figured out on paper, ‘millions in it.'”

His “figuring” projected a large harvest of healthy crops and unrealistic returns on them. He borrowed money for expansion and would have lost the entire farm if his mother – or perhaps his legally minded brother – had not come up with an obscure “stay law” that allowed him to continue long enough to pay off the debt. As a result of this experience, E.W. became a shrewd and sometimes harsh farm manager, businessman, landlord and banker and he never let himself be in a position of total vulnerability to a lender again.

E.W.’s siblings included his oldest brother James T. Hale who studied law and served as a judge and a three term US Congressman from Bellefonte, PA; a younger brother who died before he was 20 and two sisters, one of whom married Judge Patton of Towanda. None of them were raised with the practical skills needed to farm.

In 1854 at the age of 38 – following the death of his mother – E.W. married Mary Jane Taylor of Glastonbury, CT. Mary Jane, aged 25, was the granddaughter of his father’s brother, making her his first cousin, once removed (try entering that relationship in a computer genealogy program!). They remained married for 50 years and produced five children: eldest son James T. Hale who studied law and became a judge in Duluth, Minnesota; sons Elias W. Jr and Ben T. Hale of Towanda; daughters Jennie T. Hale and Anne Hale, both of whom lived their entire lives at home at Woodside. Anne and her husband, John W. Codding eventually took over the farm.

Known as Major Hale due to rank attained in the state militia, E.W. had a keen interest in military affairs however he did not serve in the Civil War. Perhaps being 46 at its outbreak in 1862 – and the fact that he had very young children – explains his absence, but the facts are unknown. He also had political ambition and was a candidate for Register an d Recorder in 1842 on the “Worky Party” ticket (a short-lived Populist type party). After a sound defeat, he became an ardent Whig and subsequently a staunch Republican. While he never ran again for office, he was a delegate to many conventions and pulled strings to help friends and relatives get elected. In 1850, E.W. was appointed as a deputy US Marshal and given responsibility for conducting the census in the Towanda area. He was a Presidential Elector in 1864, delivering the county’s vote for Abraham Lincoln in Harrisburg and then Philadelphia.

In July 1863, the First National Bank of Towanda was chartered with E.W. as one of the original directors and stockholders. He remained a director for over 25 years. From about 1844 – after he lost the election and almost lost the farm – to the late 1890’s, E.W. had business interests in every conceivable area of commerce – along with managing one of the larger farms in the region. His record books are filled with loans to individuals and businesses, mortgages, leases and all manner of other legal documents. More than actual hands-on building or farming, he was an investor. He owned an entire block of shops on Bridge Street in Towanda. In addition to his many local investments, he also supported early explorations for iron ore in Minnesota by his sons James & Ben T. Hale.

In the town of Towanda, E.W.’s “monuments” are Christ Episcopal Church –where he was a solid weekly attender – and the Keystone Theatre / Hale’s Opera House building. The Opera House may have been a monument to his schoolteacher mother as it was used largely for teacher institutes, lectures, speaking contests and graduations in the early years.

According to a 1938 obituary for E.W.’s son Ben T. Hale, actual construction of the Hale’s Opera House was completed by the firm of Rogers and Hale – a partnership of Ben T. Hale and his father-in-law, L.B. Rogers. They also built the Episcopal Church and the toy factory that once operated near the river in an area close to the current site of Memorial Hospital. After the death of his father-in-law, Ben also built a planning and lumber mill that later became the Towanda Chair Factory.

In any case, the Opera House was one of E.W.’s many businesses. Very different from the current Keystone Theatre, the brick exterior and the many clues found in the construction and on the interior walls are all that is left of the original opera house. Built before electricity or automobiles, one can only imagine the Hale family theatre when it opened with Mrs. Bowers, one of the leading lights of drama, onstage in September of 1887. Lit by candles or gas lamps, it was located above a block of first floor businesses and had four seating levels. Some seats had poor visibility due to posts holding the upper levels.

True to form as an investor, in 1888, Hale’s Opera House was being operated “in account with Clarence Kirby” who kept a percentage of ticket sales and presumably served as a manager. That year, the primary entertainment offered was minstrel shows – Barlow Brother Minstrels; Dockstaber Minstrels; AG Thompson Grass Widows; Hi Henry Minstrels; Rice & Sheppard Minstrels and Ellis G. Ken Minstrels – interspersed with local events like a Grand Army Bean Bake, high school graduation, a fashion show and dramas. Productions of “Uncle Tom’s Cabin” were perennial in the early years of the Opera House – being put on by traveling and local groups at least once – and often 3 or 4 times – a year. Other bookings in 1888 included Mrs. Tom Thumb and Clara Scott, a Chicago church musician and hymn writer who probably appeared as an evangelist.

Winter & spring of 1889 saw productions of Dan’l Boone, Uncle Tom’s Cabin, Blind Tom, Queen Esther and the Mohicans along with numerous temperance lectures, church meetings and school graduations. A “Home Talent” show for the benefit of Packer Hospital is listed on Dec. 10, 1889. Teacher’s Institutes were held annually for five days at a time with various sponsors and professors holding them.

During the 1890’s, according to Hale’s record books, along with many of the most famous traveling minstrel shows of the era, local singing schools, church, political and school events were regularly held at the Opera House. Other notable productions included “Stetson’s Uncle Tom’s Cabin”(annually); a play of Little Lord Fauntleroy; Sousa’s Band (10/1/1892); “Widow Murphy’s Goat,” “Ruth the Blind Girl;” Pat Rooney Comedy Co; Madame Lustig; Germainia Band and many other entries that are difficult to decipher and performers names that have been lost to time.

In 1901, the commencement exercises for the Susquehanna Collegiate Institute were held at Hale’s Opera House. A newspaper clipping from that week describes the event as starting at 8:15 PM and “opening with a march and overture by the orchestra,” as graduates and administrators took their places on the stage “which was decorated with palms and candelabra, while in front a bank of flowers extended across the stage. A large daisy chain was suspended from the center in front and extended down at either side in sweeping festoons and the class colors, gold and white, and the school colors, red and black – and the American flag draped the sides of the proscenium arch.” Salutatorian of the class was E.W.’s granddaughter, Mary Rogers Hale (daughter of Ben T. Hale) who went on to attend Wells College and married H. D. Crouch in 1906 at Christ Church in Towanda.

One story that has been handed down from the early years of the opera house, was the night when the fighter, John L. Sullivan came to the theatre. According to E.W.’s grandson, Jack Codding, “Grandfather had to put in extra posts to hold up the balcony as the crowds that came in by train off of Barclay Mountain were so big.” Jack would have been very young at the time so clearly this was a memory that made a great impression. Other accounts relate that “1400 people showed up at the 900 seat theatre” to see Sullivan.

E.W. still owned the opera house when he died at home on April 21, 1905 at the age of 88. His wife sold the building a few years later. In the years to come, it was gutted and completely altered on the inside. Several renovations later, it is a modern yet historic theatre that the Hale family could not have imagined. Nevertheless, whenever live performances are held – especially those times when someone chooses to sing or play without a microphone – the ghost of E.W. and that old Opera House is still there….

Ruth Tonachel is Executive Director of the Northern Tier Cultural Alliance, a former board member of the Bradford County Regional Arts Council and the great great grand-daughter of E.W. Hale.